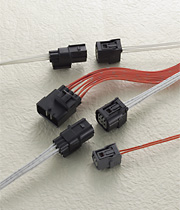 -The connector mechanism only allows the retainer to be set when the terminal is completely inserted.
-These connectors can be directly secured to a bracket on the car body.
-RoHS/ELV Compliant